Warning: "continue" targeting switch is equivalent to "break". Did you mean to use "continue 2"? in /home/public/content/themes/Extra/includes/builder/functions.php on line 5918
 Why Don't Women See Themselves as Entrepreneurs?

Why Don’t Women See Themselves as Entrepreneurs? 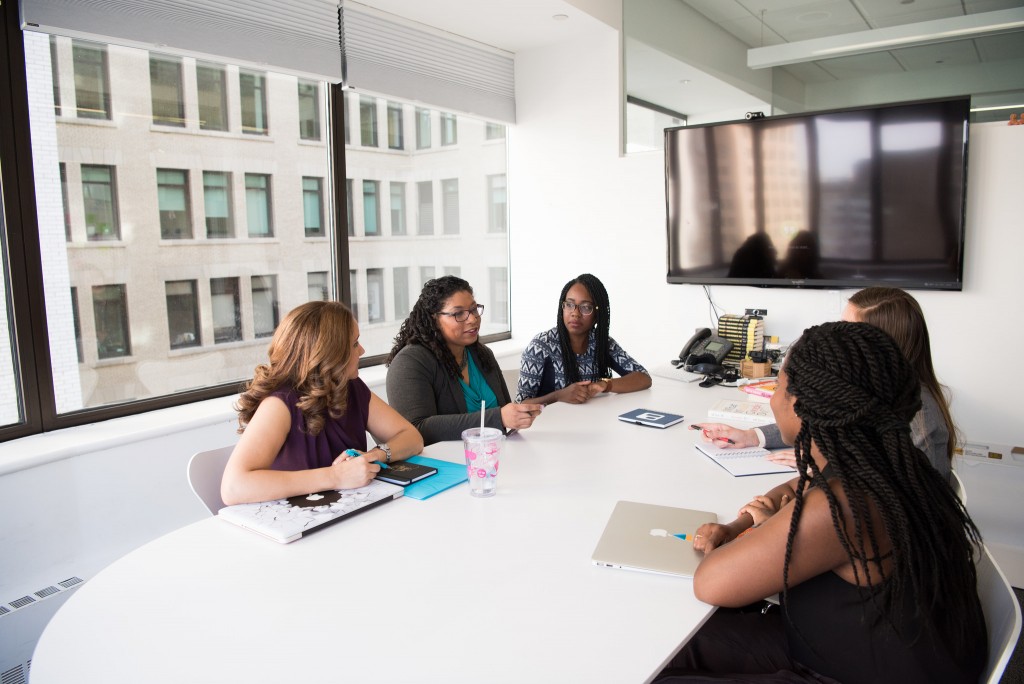 It lurks as an unspoken point in discussions about closing the gender gaps in wages, wealth, investment, leadership, and equality: If more women start and lead companies, progress toward closing these gaps will be accelerated. But in the United States, women don’t become entrepreneurs. Why?

A New York Times article asked this questions in June 2017, with good reason: Women start only 36% of all U.S. businesses and only 10% of tech startups. Women are half as likely to employ someone other than themselves, and 89% of women-owned businesses are sole-proprietorships.

What is actually going on here? Research has consistently shown that companies with women serving in senior leadership positions or on the Board of Directors are more stable, sustainable, and profitable. So why is this not translating to the majority of businesses started and owned by women?

The reasons are systemic, but fall into three broad categories.

During the 2012 presidential campaign, Republican candidate Mitt Romney made a comment that is still referenced mockingly: He encouraged students at Otterbein University to start a business by borrowing money from their parents, after telling the story of how Jimmy John’s owner started the sandwich franchise by borrowing $20,000 from his father.

As the OECD data suggests, this dynamic particularly affects women, in a pattern that can be seen over and over across the financial industry: Women are starting with fewer resources to draw from.

A woman just starting a new business is likely leaving the starting gate at a disadvantage to male peers. Women hold two-thirds of the $1.3 trillion in outstanding student loan debt in the United States. They are paid, on average, 78 cents to every dollar a man is paid (the wage gap for Black women and Latina women is 63 cents and 54 cents, respectively). If a female entrepreneur funds her startup from her day job, she has a smaller paycheck to draw from; if she applies for a business loan, the combination of her lower income and higher debt means she is seen as a higher risk to business lenders.

In fact, according to a study conducted by Fundera, even though women request smaller loan amounts, they are less likely to receive business credit, and the credit they do secure is more likely to have shorter terms and significantly higher interest rates.

“Women entrepreneurs get offered smaller loans across every product, from the same groups of online lenders, with no exception, and pay significantly higher interest rates than men do,” the Fundera report reads. “While SBA talking points and a study often cited by the agency from the Urban Institute claim that SBA loans are three to five times more likely to go to women or minority-owned businesses than conventional business loans are, our data paints a [different] picture of equality for SBA financing. Even among SBA loans, women receive 2.5 times less money than men do: on average, women get $59,857 while men receive $156,279.”

Overall, women-owned businesses “only account for 4.4% of all dollars lent to small businesses each year.”

Women have fewer options for bypassing the bank and dipping into personal savings for startup funding, as well. While women earn 78 cents on the dollar, they own only 32 cents for a man’s dollar (and for women of color, its pennies on the dollar, if anything at all). This is the wealth gap–the store of funds for investments or emergencies. Why do women own so much less wealth? According to the report, Closing the Wealth Gap by Heather McCulloch, reasons include wage disparities, paying more on loans, and caregiving burdens. (Women are more likely to be putting their time and funds toward caring for children, grandchildren, or elderly relatives.)

More expensive forms of financing are no easier to come by. In 2016, venture capitalists invest $58.3 billion in 5839 companies with all-male founders; the 359 businesses with female founders that received VC funding got just $1.46 billion. While the number of women-founded businesses that received VC funding increased in 2016 to 4.94% of all VC deals (up from 2.95% in 2006), the total dollar amount these businesses received shrank to 2.19% of all venture capital funding–the smallest amount in 10 years with the exception of 2008 and 2012.

In a report titled, The Gender Gap in Venture Capital–Progress, Problems, and Perspectives, the authors write, “It is quite surprising that women are still, practically speaking, shut out of the market for venture capital funding, both as CEOs and participants of executive teams.” In fact, even though teams with both male and female founders raise more money for companies with higher valuations, “all-men teams are four times more likely to receive funding from venture capital investors than companies with even one woman on the team.” The result is that 86% of all venture-backed companies have no women in senior management positions.

In her book, Reset, Ellen Pao describes how one startup she worked for benefitted from their access to a network of powerful and well-connected venture capitalists. “At a very early point, [TellMe] needed to get cheap phone time,” she writes. “John [Doerr] brokered a great deal for us with AT&T. He just called AT&T’s CEO, and poof, it was done–with an added bonus of a $60 million investment.” John Doerr, a venture capitalist at Kleiner Perkins, would go on to hire Pao to the firm that she would sue for gender discrimination. How many women-run companies could have benefitted from a similar phone call, but did not have access to networks with the power (or willingness) to make that ask?

VCs operate in a high-risk world, with large sums of money and even larger unanswerable questions about whether a product will be successful. To navigate this, they fund solutions to problems they understand coming from people that fit into a pattern they have seen reach successful outcomes. When over 90% of VCs are men and many are themselves either products of top-ranked universities or previous entrepreneurs, the people who tend to get funding are white men from six U.S. universities (Stanford, Harvard, Berkeley, MIT, NYU, and the University of Pennsylvania). When women present in front of male VCs, unconscious bias comes into play. Study after study has shown that women entering leadership roles are routinely viewed as either unlikeable and competent, or likeable and incompetent. A pitch from a male entrepreneur may be perceived as logical, confident, and persuasive; but that same pitch by a female entrepreneur may be perceived as aggressive, cocky, and off-putting.

The pattern recognition VCs engage in also creates massive blind spots when examining the potential of a business plan. If a woman-led company is focusing on women as target customers, VCs very often either miss the market potential or are only able to relate to it through their wives. In either case, the VC is unlikely to invest, or to provide proper support to such a company if he does invest, limiting growth potential for women entrepreneurs.

Of course, the majority of women entrepreneurs never go in front of a venture capital firm at all. VCs rely on networks for a steady stream of deals, but if they do not make an effort to actively search outside their own established network, it is highly likely that their deal flow will look just like the VC himself: white and male. This is the “old boys club,” where men mentor other men and sponsor other men by referring them to new opportunities. And there is evidence that, far from breaking out of the old boys club, men are retrenching to it in the wake of sexual harassment scandals. A survey conducted by LeanIn.Org and Survey Monkey found that since the #MeToo movement spread throughout Hollywood, Silicon Valley, and beyond, the number of men reporting they were uncomfortable with mentoring women has tripled. This will exacerbate the already-existing findings that women are 24% less likely to get advice or mentoring from senior leaders.

Instead of putting in place policies to address sexual harassment and discrimination, some male investors are ignoring the problem and blaming “pipeline issues” for the lack of women-led companies getting funding.

The Gendering of Entrepreneurship

There is a reason why unconscious bias and pipeline issues are blamed for the challenges women entrepreneurs face in accessing mentors and funding: entrepreneurial behavior is gendered. And the gendered expectations of entrepreneurship means that the stereotypes and role models around becoming an entrepreneur effectively cut women out of the mythology of the entrepreneur from the start.

Why do women start companies? One study found that when starting a new business, women often frame the process as something they just fell into, while men frame it as a singular driving force. Several other studies found that women start companies because they value independence and flexibility in working schedules more than men; some women even see starting a company as a way to gain social status, particularly in fields dominated by women, because of the masculine attributes attached to entrepreneurial behavior.

But what women and men expect from their businesses seems to vary widely. Studies have found that men almost invariably put financial success at the very top of their list when defining business success; women are less likely to do so. Women are more likely to measure the success of their business in terms of having control over their own destinies, building relationships, and, especially for women with dependent children, independence.

Because the desire for independence and flexible work schedules is so strong for women business owners, many choose to operate their businesses out of their home. A study found that these home-based businesses were not taken as seriously, and viewed more as hobbies, even by the business owner. Furthermore, women consistently rank themselves as less qualified or less skilled to run businesses, and have a negative entrepreneurial self-image, assigning more importance to masculine characteristics such as self-confidence, high energy, aggression, and decisiveness.

The media portrayal around entrepreneurship reinforces this gendering, celebrating the hyper-aggressive entrepreneurs that take huge risks (Elon Musk) or act decisively (Donald Trump’s portrayal on The Apprentice). These examples made good stories because they provide a story arc of a hero’s (or anti-hero’s) journey. But the stories of highly successful female founders, such as Stitch Fix’s Katrina Lake, garner less attention–successful businesses that are stable and predictable don’t provide that heroic mythos. The result is that women are left without female role models of successful entrepreneurs in popular media.

Why don’t women see themselves as entrepreneurs? Because at every step of the process of building a company, entrepreneurial ecosystems perceive their work as something foreign. When pattern recognition drives decisions around which businesses will thrive, unconscious biases and systemic sexism from patriarchal institutions will continue to leave women behind.