The article is part of WhiteHat Magazine’s Fall 2017 edition, “Disaster and Development”. This is an unlocked preview. If you enjoy our work and want to access the entire edition, become a member today!

Twitter and Tear Gas: The Power and Fragility of Networked Protest 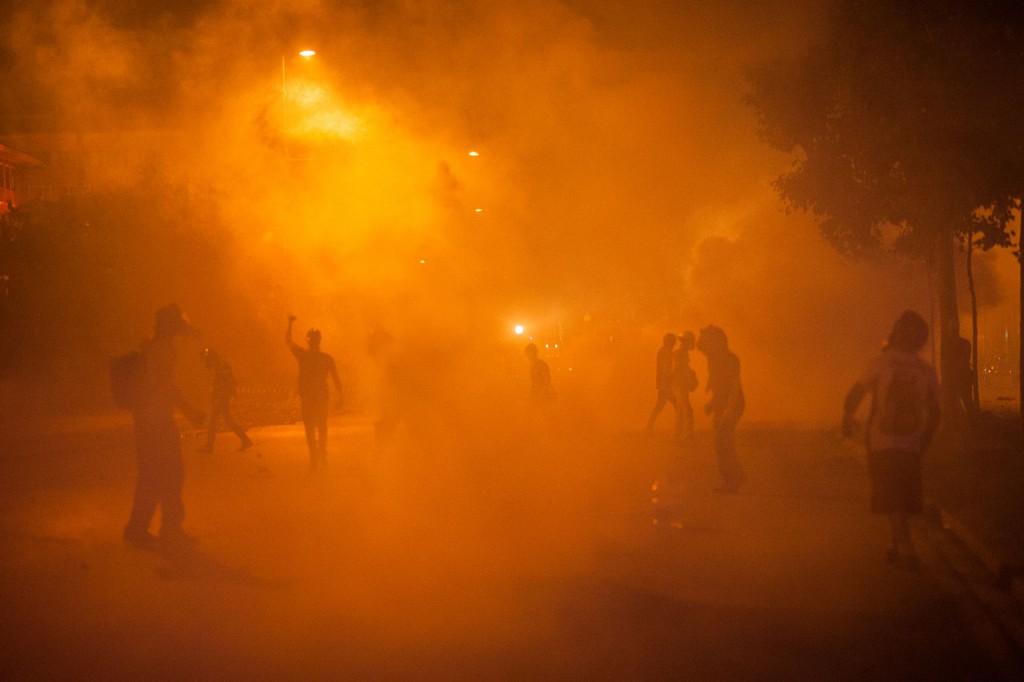 Anger and shock over the outcome of the 2016 presidential election was translated into the largest ever global protest when the Women’s March organized in cities across the globe. Other protests have tried to capture the energy of that march, with Tax Day marches and marches for science and refugees, but the question of whether these protests will affect public policy in any meaningful way is still an open one.

Perhaps unexpectedly, the most successful protests in 2017 have been the sometimes spontaneous counterprotests that have sprung up to push back on the narrative presented by white supremacist and neo-Nazi demonstrations. After Charlottesville, several neo-Nazi protests were either cancelled, or saw drastically reduced turnout, due to widespread condemnation and counterprotests that turned out large crowds.

What makes some protests more successful than others? Why did the Tea Party movement find institutional power while the Occupy movement faded out? Why has the Women’s March movement so far found less success than the 1963 March on Washington, despite surpassing its size? Why were the Iraq War protests largely ignored by politicians, but the SOPA and PIPA protests had success in changing public policy?

These questions are at the heart of Twitter and Tear Gas: The Power and Fragility of Networked Protest, a new book that combines the academic studies and personal experiences of technosociologist Zeynep Tufekci. In writing Twitter and Tear Gas, Tufekci has created a guide to the past quarter century of protests and how protest movements have evolved alongside the internet, as well as provided a framework to understanding future protest movements and governments’ reaction to them.

On August 28, 1963, more than 200,000 people gathered in Washington, DC, in what became a key moment for the civil rights movement in the United States. The March on Washington for Jobs and Freedom created momentum, built support for the Civil Rights Act, and created a culture shift that made racist sentiments socially unacceptable.

Just 40 years later, on February 15, 2003, a coordinated day of protests in 600 cities around the world brought between six and eleven million people into the streets in 60 different countries. In the United States, CBS News reported protests took place in 150 cities, with 100,000 protesters in New York City and up to 200,000 in San Francisco. This massive turnout was just the largest of several anti-war demonstrations against President George W. Bush’s push to invade Iraq and depose the government of Saddam Hussein; between January and April 2003, it is estimated that 36 million people turned out to pressure their governments to avoid this war. But it was no use–the invasion of Iraq by coalition forces began on March 20, 2003.

Why was the 1963 March on Washington able to create so much more impact than the far larger Iraq War protests 40 years later?

Tufekci argues that although we perceive the internet as making effective protest easier, this becomes less and less true as governments learn how to adapt and interpret protest in the age of social media.

“In the networked era, a large, organized march or protest should not be seen as the chief outcome of previous capacity building by a movement; rather, it should be looked at as the initial moment of the movement’s bursting onto the scene, but only the first stage in a potentially long journey,” Tufekci writes. “The civil rights movement may have reached a peak in the March on Washington in 1963, but the Occupy movement arguably began with the occupation of Zuccotti Park in 2011.”

Twitter and Tear Gas examines how a movement is made in a networked era, from the very first conversations and connections made between new and seasoned activists facilitated by social networks, to how the structure of protest movements in affected by the architecture of social media outlets themselves.

A culture of horizontalism is common among global anti-authoritarian protest movements. These movements are distrustful of institutions and formal organizations, valuing instead a leaderless grassroots organization that allows all to participate. “The intense horizontalism and participatory practices ingrained in these protests–because they are what protestors feel are missing in their lives,” writes Tufekci on page 94, “have complex effects on how movements proceed and how they organize.”

One such organizational process Tufekci describes as “adhocracy”: forming a movement without early planning, dealing with issues only as they arise, and decision-making by people who show up that day. Occupy Wall Street was an excellent example of this: very little pre-planning for the movement was done, and even the original location, One Chase Manhattan Plaza, had to be changed on short notice when the police blocked it off. This affected Occupy’s narrative capacity–when I covered the initial protests, one question I was continuously asked was “but what do they want?” Because the movement was leaderless by design, there was no central committee to plan messaging and media relations, or to appear on camera as the spokesperson for the movement. With very little planning, however, the movement was able to coordinate Occupy protests across the United States and around the globe.

Two years after Occupy first entered Zuccotti Park, a massive movement shook Turkey with similar tactics. The Gezi Park protests in 2013 once again demonstrated that a movement can go from zero to massive within days, thanks to digital technologies, but with speed comes brittleness. There is no institutional capacity to change directions when the movement hits a barrier (“tactical freeze,” according to Tufekci), and leaves the movement vulnerable to infighting without a way to solve internal conflicts.

Importantly, governments understand this dynamics in protests more and more, and gauge their response to it accordingly.

One of the most important reasons why the 1963 March on Washington was more successful in creating an impact on public policy than the 2003 Iraq War protests, according to Tufekci, was due to how social movements build and signal their capacity. She writes, “Strength of social movements lie in their capacities to set the narrative, to affect electoral or institutional change, and to disrupt the status quo. […] The advantage of focusing on capacity rather than outcome is especially apparent in understanding the impact of digital technology on social movement trajectories. This is because seemingly similar outcomes and benchmarks–for example, a protest march attended by a hundred thousand people–do not necessarily signal the same underlying capacity to those in power when they are organized with the aid of digital technology as they do when they are organized without such supporting tools.”

The 1963 March on Washington was effective in sending a signal because it was the outcome of years of organizing and community-building–this community had already successfully boycotted the Birmingham bus system and demonstrated its capacity in a large turnout in Washington, DC. The 2003 Iraq War protests could be dismissed as the expression of a few “focus groups” because policy-makers were aware of the lack of organizational capacity behind the large numbers.

Another way to understand government reactions to protest movements is by understanding their electoral capacity. The clearest contrast in this is between the Occupy movement and the Tea Party movement.

Occupy was emblematic of the horizontal, anti-authoritarian movements that emerge from the American political left, and the movement had trouble in organizing action that could engage with larger organizational power structures due to a culture of distrust of these institutions. As such, the Occupy movement never attempted to exert any pressure on policymakers or electoral systems, until many years later when former Occupy activists recruited Senator Bernie Sanders for the 2016 presidential campaign. Occupy did not recruit candidates to run for office, organize or campaign for candidates who expressed sympathy with their views, or mount an effective challenge against incumbent politicians. At one point, Congressman John Lewis attempted to address an Occupy Assembly in Atlanta, but instead of welcoming the advice and wisdom of a seasoned activist, the Assembly devolved into squabbling over whether it was appropriate to give the stage to someone whose position seemed to imply he was “inherently more valuable than other human beings.” John Lewis ultimately left without addressing the Assembly.

While the Occupy movement was composed of people who were disillusioned with the electoral system of representative government, in contrast, the Tea Party movement was comprised of people who invested heavily in making the electoral system work for them. Their online organization was focused on educating other activists about the arcane rules of the policy-making process, alerting others when to intervene and contact representatives to hold them accountable, and most importantly, recruiting and campaigning for people who would represent their positions in office. While Occupy became an almost quixotic movement that resulted in little to no electoral victory (even if the movement does have an outspoken presence within the current Democratic Party), the Tea Party movement saw massive electoral and policy success that continues to shake American politics to its core.

With these lessons in mind, where does Tufekci see the future of digital networked protest going? That, she believes, is still an open question. As trust in elites and gatekeepers have fallen out of favor in our media consumption and social movements, governments have responded by suppressing facts through an overwhelming wave of noise and static; meanwhile, our protest movements have not yet learned how to build resilience in an online media culture that values drama and discord. “The coevolution of power and protest is far from over,” she writes, “and social movements are far from static. Many social movements, too, are testing new arenas, developing new tools, and building new capacities. They are flexing new muscles. It is wrong to label movements that struggle as failures, just as it is wrong to conclude that a large protest, measured by the number of people on the street, is a sure sign of success.”

Twitter and Tear Gas is available at twitterandteargas.org as a Creative Commons download, but is also available for purchase on Amazon. For book copies that are purchased, Zeynep Tufekci has stated profits from book sales will be donated to refugee causes.